"At first instance, it doesn’t look like a temple and the scary cave entrance with its menacing creatures and demons take center stage. But, once you enter the cave, you see Ganesha, a set of 3 shiva lingas on one end and some other idols of gods. The insides of the cave are not big, but there are some temple like structures outside the cave. In addition to the cave and the temple, there is a bathing site with apsaras. These bathing sites are reminiscent of South Indian Hindu temples." 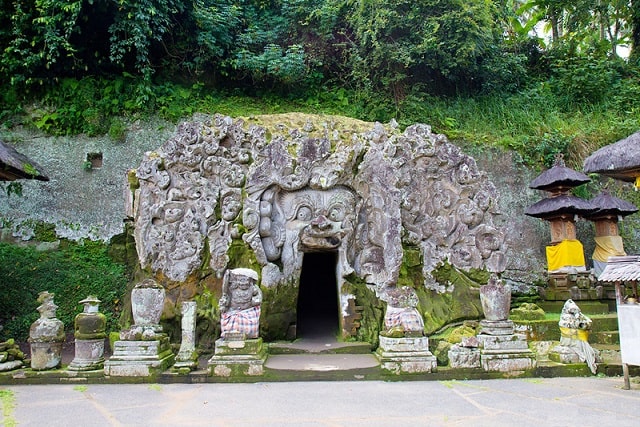 The entrance of the Elephant Cave

Goa Gajah, also known as the "Elephant Cave", located east of Peliatan, close to Ubud, in the center of the island of Bali. The cave Goa Gajah dates back to the 11th century and was discovered in 1922. The entrance to the cave is a relief of dangerous creatures and demons with wide open, threatening mouth. They thought it suggested an elephants mouth. Hence the name Elephant Cave. Others claim that the gaping mouth is the entrance to the Hindu god of the earth Bhoma, while others say that the mouth is part of the child-eating witch Rangda in Balinese mythology.
This place is already mentioned in the Javanese poem Desawarnana, which was written in 1365.

Notable is the mix of Hindu and Buddhist elements. Around the year one thousand, the cave must have been used by Hindus; probably before by Buddhists. 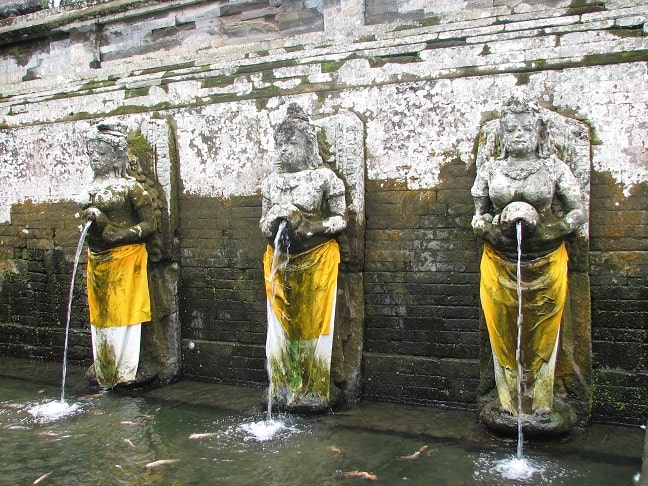 The leading theory suggests that Goa Gajah was used as a hermitage or shrine by Hindu priests, who had dug the cave entirely by hand. Although it is recognized as a Hindu shrine, a number of relics and the vicinity of a Buddhist temple, suggests that this place has a special meaning for early Buddhists had on Bali.

For such a busy tourist attraction is the Elephant Cave is actually quite small.
The temple is daily open between 8:00 and 16:00 (official opening). Admission is Rp.6.000 and it is compulsory to wear a sarong when you enter the temple complex. Along the large parking lot, you have quite a few souvenir shops. Prices are lower than in many other souvenir shops. Here you can already buy a sarong at the entrance you can also borrow one.

Goa Gajah is listed on the UNESCO World Heritage list. 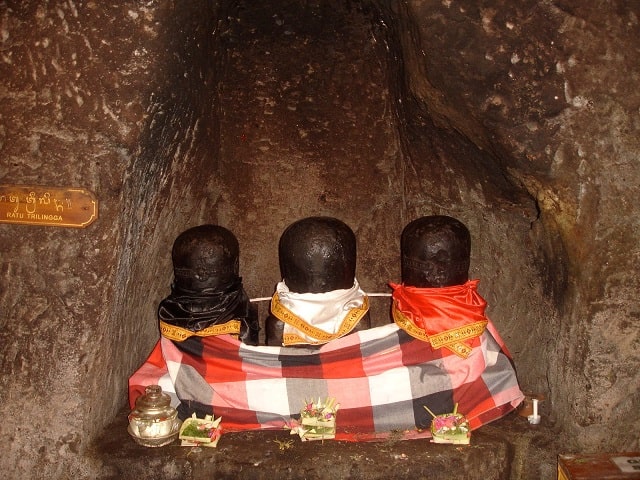 Phallus symbols for Shiva in the Elephants Cave